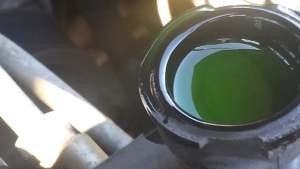 Antifreeze keeps your engine from overheating and second it will keep it from freezing in the winter. Straight water is a fine heat transfer matter but freezes when the temperature drops below 32° F and boils when the temperature is above 212° F. The optimum mixture for most coolant systems is 50 percent antifreeze and 50 percent water. This mixture not only increases the range of operation in the cold but will, when under pressure of the the closed system, raise the boiling up to 300° F.  So you know you have to be concerned about the freeze protection offered by antifreeze, but you also need to worry about your coolant’s pH level, as well. We will go over that in a minute.

There are different kids of antifreeze. They are usually called IAT, OAT, HOAT, Dexcool, G-5 and propylene glycol. The first 5 are all ethylene glycol base with different additives.  In the past, the color of coolant was determined by the type of chemicals used to prevent corrosion. Older coolants that used “Inorganic Additive Technology” (IAT) were usually green in color. General Motors came out with Dex-Cool extended life antifreeze Organic Acid Technology (OAT) which is orange in color. Some European companies used Hybrid Organic Acid Technology (HOAT) (G-5) which was light yellow in color. The color was only an added dye that would distinguish one from another. Now most manufactures use variations of these anti-corrosion additives and variations of colors including multiple shades of orange, red, red-orange, dark green, green, blue, blue-green, yellows, clear, pink and purple.

Dex-Cool had problems in their early years with a reaction with the air molecules and would build up a sludge in some models as soon as a couple years old.

Many experienced repair shops are cautious about Dex-Cool because of what they witnessed, but in the last decade the bad sludge problem has rarely been seen. Probably (my opinion only) GM quietly corrected the formula.

All these antifreeze(s) are basically the same but with small amounts of additives of one kind or another depending on the manufacturer. These additives are corrosion inhibitor and antifoam agents. The additives are kinds of phosphates, silicates, borates, carboxylates, nitrites and molybdates. These provide corrosion protection by either chemically interacting with the metal surfaces where needed, or by universally laying down layers on those surfaces.

Antifreeze will last 2 to 5 years when the vehicle is new. As your vehicle gets older the antifreeze seems to become acidic and contaminated sooner. Some manufacturers like Hyundai recommend every 60,000 miles then every 30K after that. Another example is a 2012 Honda that recommends antifreeze flush every 120,000 miles.

Antifreeze should be inspected for three issues. One, test it with a “coolant hydrometer” or a refractometer for freeze point. This device measures the specific gravity of the coolant. Simply insert the tip of the hydrometer into the antifreeze and pull some into the chamber, enough that the float lifts free. The reading tells you the freeze protection. Two, check for sludge or contaminates. Three, check the pH acidic level.

The pH level of antifreeze is an effective way of determining its condition. Just as a mile is a measure of distance and the hour is a measure of time, the pH unit measures the degree of acidity or basicity of a solution. So, pH is the measurement of the hydrogen ion concentration, [H+]. Every aqueous solution can be measured to determine its pH value. Water has a pH of 7.0 and antifreeze has a pH of 8.3 to 10.5. The pH value is a way of expressing the relative acidity of coolant. Acidity does cause corrosion. There are instances of old coolant becoming so acidic with that it turns the entire engine into, in effect, a weak battery, affecting electronic engine control readings. Over time antifreeze becomes more acidic, in other words, the pH drops lower. If you lived in a tropical area you could use straight water as your coolant except that the pH would be below 7.0 quickly and cause the interior of the engine and components to rust and corrode.

OverFlow Tank (do not fill to top)

Radiator cap on the radiator

Pressurized cap on a coolant tank.

When someone neglects the antifreeze/coolant, they could experience failures from internal corrosion in the radiator, heater core, gasket or freeze plugs. We recommend to flush your coolant system whenever the pH drops below 7.2. We normally test pH and freeze point on every oil change service.

Thank you for visiting Lynn Auto Repair in Jackson, TN. Count on our automotive repair technicians to keep your car, truck, suv, or van on the roads longer and safer. Schedule your appointment today (731) 664-5782 or schedule here.